Troll Hunt – The great story of the little people and the giant trolls, Chapter 3

“Once upon a rhyme in the dawn of time,
On the very first day the sun began to shine,
there was a planet so small with a sky so big,
in a forest so thick—an acorn fell to the ground and split.

And right then from the tiny, tiny acorn,
Two enormous forest trolls were born.
The two became many, many became a-million,
Because trolls love life and they love to have children.

They lived in harmony with both birds and bees.
There was peace and they never ever hurt the trees.
They took care of them all—no soul too tiny:
cedar, birch, ash, elm, oak and pine tree.

Then a million, million years went by,
And from far away something appeared in the sky
And out came a strange looking alien race
Only 5 feet tall with small eyes in their face  .

The trolls greeted them welcome to share the lands,
and taught them the balance of beings and plants.
But at some point in time no one really knows when,
it was like the small aliens forgot it again.

They started building a city, all over around them,
As big as an ocean and tall as a mountain
There were flat roads of stone where the grass used to grow,
And at night false stars would now light up and glow.

There were “horses” on wheels, that made noise and smelled bad,
and smoke blocking the sun. All this made the trolls sad.
Because in a place with no sun, no flowers have colors,
no birds can sing songs and no trolls can live.

Now the trolls started walking toward new lands,
to make anew home with balance of beings and plants.
And they found a beautiful forest, maybe the last of its kind,
where the birds could still sing and the sun could still shine.

But what happened before couldn’t happen again,
so they told this here story again and again:
If you love the forest, the trolls will protect you,
if not they will grab you, catch you and trap you.” 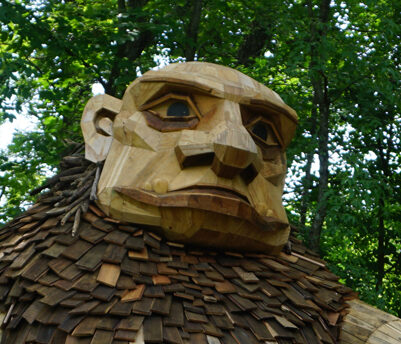